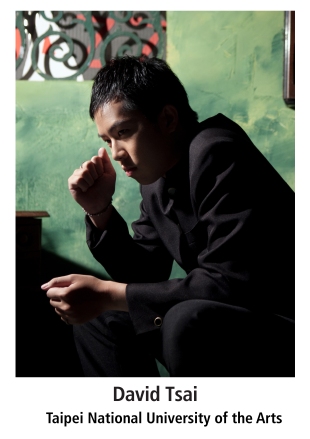 TSAI Cheng-che is a Taiwanese composer born in Kaohsiung in 1988. He completed his Bachelor’s degree in music at the National Kaohsiung Normal University (NKNU) and received his Master’s degree from the Institute of Music at National Chiao Tung University, where he studied composition with LEE Tzyy-sheng.

He is currently pursuing a Doctor of Musical Arts in Composition at Taipei National University of the Arts under the tutelage of PAN Shyh-ji and YANG Tsung-hsien. He also joined a 2016 exchange program for doctoral students and spent a year at the Central Conservatory of Music in Beijing studying with GUO Wen-jing.

TSAI is currently crafting new compositions that embody elements from Asian religious music, in which he draws inspiration from Buddhist music, traditional Indian music, and other ritualistic music from around Asia in the hope of promoting Asian cultures on the world stage.

“Brahma” is a double-wind orchestral composition in ritual style which is written after my personal belief, Brahma, the god of creation. He is also one of the three dominant gods of Hinduism along with Shiva and Vishnu. Brahma was subsumed as a Guardian after the rise of Buddhism. He was worshiped readily and was also being called as four-faced Buddha later in Thailand. The idea of the composition is based on the spirit of ritual which is inevitably repetitive in the procedure and represents a symbol of obstinacy from Brahma. There are five sections in the form: A─B─A’─C─A”. “Brahma” with unusual timbre and the techniques of orchestration has uneven instrumentation in winds to depict the sacred atmosphere of religion and the mysterious power of ritual. Listeners can perceive my imagination to the music of Tibetan Buddhism and Chinese ceremonial music. Composing is not only an endless journey or an adventure of self-exploration, but also a four-faced statue of a golden Brahma or a lotus in believers’ hands.