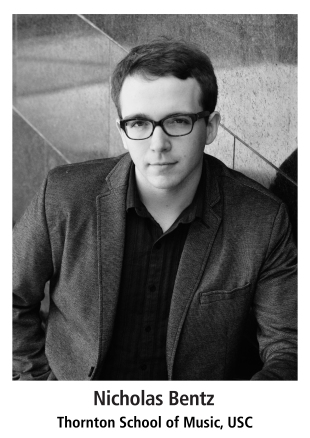 Nicholas Bentz is a composer-performer who is primarily interested in the intersections of art and alternative modes of perception and expression. His music takes its inspiration from a wide array of sources including visual and cinematic art, anthropology and philosophy, and interactive art. Nicholas has received commissions from the Charleston Symphony, Occasional Symphony, Symphony Number One, the Johns Hopkins University Applied Physics Laboratory, and SONAR New Music Ensemble, among others, and has had his music played by the Jacksonville Symphony and the Peabody Modern Orchestra. Nicholas is currently a Composition Teaching Artist Fellow with the Los Angeles Chamber Orchestra and was a winner of an EarShot New Music Reading through American Composer’s Orchestra and SONAR New Music Ensemble’s RADARLab Competition as well as the Baltimore Choral Society’s Student Composer Project. He was also a finalist for the ASCAP Morton Gould Young Composer Awards in 2014, and was the Composer in Residence for Symphony Number One’s 2016-17 season.

Nicholas currently attends the University of Southern California where he is pursuing a master’s degree in composition under Andrew Norman as the graduate assistant to the Thornton Edge new music ensemble. He is also currently studying violin with Lina Bahn. Nicholas received his bachelor’s degree in composition from the Peabody Institute under Kevin Puts while also completing a bachelor’s and master’s in violin under the tutelage of Herbert Greenberg. His previous composition teachers include Yiorgos Vassilandonakis, George Tsontakis, and Felipe Lara, and his previous violin teachers include Yuriy Bekker, Espen Lilleslåtten, and Diana Cohen.

A Cosmos in Stone, Respawning is a piece that attempts to draw on the universalities that we as humans feel towards an enigmatically ineffable and nameless beyond. In researching for this piece I came across the rock art research of J. David Lewis-Williams, who is an expert on the art of the San people of southern Africa. They represent the ‘first nation’ of peoples in the region and have admirably maintained their rituals and traditions for untold millennia despite the ever-quickening pace of the world around them. Many of the paintings their distant ancestors created have been dated back 70,000 years and represent some of the earliest known artistic expressions to have survived to the present age – for context, the famous cave paintings in Lascaux have been dated to be around 17,000 years old. The overarching theme of research up until Lewis-Williams’ was mired in colonial and racist biases, supposing that the San bushmen were responding to outside influence in their art, or that the art itself was a utilitarian device in order to secure good luck in the hunt. However, Lewis-Williams combined his rock art research with a deep dive into the ethnography and cosmology of the San people. In talking with many of their medicine men and shamans, he learned that many of these paintings served a much higher and spiritually potent purpose. The most striking examples of San rock art center on surreal half-human, half-animal therianthropes that have been theorized by the modern San as depicting shamans entering trance like states due to the purposeful ingestion of hallucinogenic plants along with extreme sensory deprivation in order to complete healing ceremonies.

According to ancient San cosmology (as researched by Lewis-Williams), the rock surface on which the paintings stand act as a membrane through which any individual could access the spirit realm. It is those that were able to communicate most effectively with the spirit realm (via their painting) that naturally became shamans and medicine men in San society. These images are striking and multifaceted, with human forms mingling and budding from within the silhouettes of eland and antelope. The intricacies of the rock face itself would often determine for the traveler which animals and pictographs could be adequately portrayed.

This sudden fascination with the origins and meanings of San rock art coincided with a rebirth of my love for videogames. Over time, I noticed that there were potent similarities and universalities at play in the overlap between the ancient practice of San rock art and the modern innovation of videogames. Both are viewed as vessels of transportation to other worlds that are beyond our current perception, taking us somewhere else, and allowing us the space to live in a place outside of what we know, if only for a brief time. This is by no means an attempt to equate the sacred and religious experience of the San people with the comparatively mundane act of roaming the map in a first-person shooter, but I do view them both as different answers to the same enigmatic question that humanity has been striving to answer since our inception so many millenia ago in that both of these modes of expression allow our selves to extend beyond our Self. It’s striking to me to see how, despite being tens of thousands of years apart, we as a species are still tackling the same universal questions. Blending these two wildly different sources together, I imagine the rock art coming alive and functioning under a sort of videogame logic which governs their actions and interactions.

A Cosmos in Stone, Respawning establishes different musical gestures and materials that function as representations of different actions and features – it’s through the interplay, fragmentation, rearrangement, and development of these features that a musical narrative is attempted to be created.