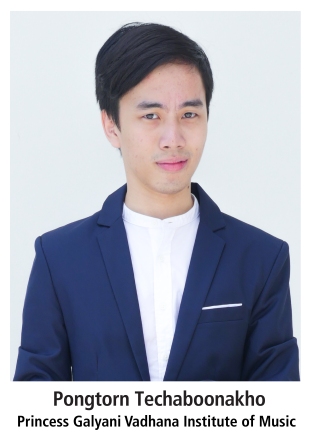 (10th July 1996) is from Bangkok, Thailand. He started his musical path playing guitar at the age of 15 under Chairat Pornamnuay. Pongtorn claimed that music was, at the beginning, just one of his hobbies, but then he realized how much music had influenced his life and wanted music to become a crucial part of his life; thus has studied music seriously since then.

Pongtorn graduated from Pre – College Program at College of Music, Mahidol University in 2012 majoring in guitar. In 2015, he was accepted as a full scholarship recipient to study at Princess Galyani Vadhana Institute of Music (PGVIM) where he has guitar lesson with Padet Netpakdee and Jetjamnong Jongprasert.

Besides guitar, he’s interest includes music composition and film scoring. Though mostly self-taught, he also received guidances in composition from Pantawit Kiangsiri, Anothai Nitibhon and Jiradej Setabundhu. It is his wish to pass on his passion and inspiration through music.

This is the first piece that I usually working on Philippines tradition Instrument “Kulintang” with 4 percussionists in percussion ensemble as a part of AYE (Asean Youth Ensemble) for PGVIM International Symposium 2018.